Bolt holes, nail holes, checking, splitting, and warping are all part of buying reclaimed beams.  While making a buying decision keep in mind that what you choose to allow as the customer is up to you. For example, nail holes do not have any impact on the structural integrity of a beam but do affect the aesthetic. You’ll need to decide what is allowable with regard to nail holes.

This is just one aspect of purchased reclaimed beams and timbers.  To make a more informed buying decision, continue reading to familiarize yourself with the common issues to consider…

1.  Condition of the beams. 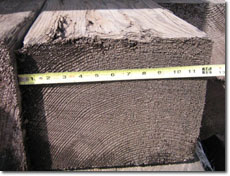 Reclaimed beams and timbers come in many different shapes, sizes, and conditions.  They have often been painstakingly removed from existing structures but sometimes care has not been used during removal.  The desired aesthetic, required structural integrity, and application will all be factors that determine the condition of the beams you are seeking. It is important to understand the many different conditions reclaimed beams can come in so that, as a buyer, you can make the correct purchase.

Have the beams been denailed? If so, has all the metal been removed or has just the visual metal? Reclaimed beams are very old, and often times, nail and bolt fragments are buried beneath the skin of the beam or within a nail or bolt hole. Removing this buried metal involves gauging the wood and leaving some unsightly gauge marks. If the beams are aesthetic, and you are not going to be resawing them, simply having the beams visually denailed is a better option.

Beams and timbers that have been resawn require that all of the metal is removed prior to sawing them. The unsightly gauge marks are usually not more than 1 ½” thick and are usually removed in the resawing process. 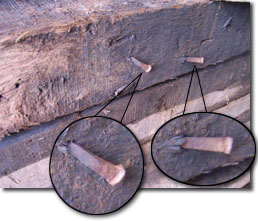 The type of nails used can often help to age the wood. Square end nails (also referred to as “cut nails”) were predominant in construction prior to 1910.

The square headed nails help date the wood. This Eastern White Pine came from a factory built pre-1900. The AltruWood customer for this wood also happens to be a hobbyist welder. After de-nailing, AltruWood provided the customer with the removed antique nails for their personal collection.

Bolt holes are also common in reclaimed beams and generally go all the way through two faces. In most cases, they do not affect the structural integrity of the beam. As a customer, it is up to you to decide if bolt holes are OK in your beams, and if so, at what point do they become excessive? Bolt holes can be plugged or left unplugged, and depending on their position in the beam (if they are at the ends), they can also be cut out. Inquiring about the location of bolt holes, the number of them and their approximate diameter can help your buying decision.

Checking in reclaimed beams is extremely common and does not necessarily affect the structural integrity and can be part of the aesthetic.

Checks are cracks that appear in the wood but do not go all the way through. It is important to get an idea of how heavy the checking is and if it is limited to just the ends (end-checking). The position of the heart will greatly influence the checking of a beam. Purchasing your beams longer than you need them allows you to cut off any end-checking that may occur as the beams go through climate change.

Splitting is checking that goes all the way through two faces of the beams. If the beams will have any structural component, splitting must be avoided. Beams with heavy checking that will undergo a climate change to get to you will have a tendency to split.

It is important to always ask if the beams have any rot, warping, twisting, etc.

Some rot and warpage is contained in the ends of the beams and can be cut out. If the beams do exhibit rot, make sure to find out how pervasive it is and where in the beam it is located.

Devices used to measure moisture content are relatively inexpensive and anyone who is selling reclaimed wood should be able to gauge the moisture content for you. In beam material, anything under 18% is considered dry, but it is not uncommon for beams in wet climates to measure around 22%. Beams with a high moisture content have a greater tendency to warp, twist, check and crack.

Beams with the heart contained or “boxed heart” are more prone to cracking, checking, splitting and are less stable; however, if the beams are not structural, boxed heart beams often represent a less expensive option. If they are structural, boxed heart beams are still an option, you just need to be more careful in your buying decision. Depending on the size of the beams, “Free of heart Center” (F.O.H.C.) can be unavoidable. Moisture content, checking, cracking, and twisting all become more relevant when the beam contains the heart. When buying reclaimed beams, it is important to ask if they are free-of-heart center. Beams that are free of heart are generally more expensive.

There are many different surface options in Reclaimed Beams. Rough sawn, hand hewn, surfaced, circle sawn, wire brushed, etc. In addition, coloration is also a key part of the desired aesthetic. Have the beams weathered to a brown or gray color? Are they painted? Have they been resawn? If they have been resawn, they will look relatively new (but usually with some of the scarring from nail and bolt holes). When considering the surface of reclaimed beams, it is important to ask yourself what most appeals to you about Reclaimed Wood. Expressing the aesthetic of reclaimed wood can be as simple as highlighting the dense grain and nail markings, or you may desire an aesthetic in which the beam is displayed in its weathered and worn form. Having a good visual sense of what you are looking for will help you to compare apples to apples when pricing out your different options.

If the beams are structural, local building codes may mandate that the beams be professionally graded. For an additional charge, AltruWood will have the beams graded prior to shipment. Grading services generally range between $200 – $800 dollars.

Pat M.
Pat Monaghan is AltruWood’s president and (often times) head sales guy. He preaches attention-to-detail and commitment to securing quality wood. He’s been known to drive a few hours to check out reclaimed beams he already inspected. Pat is interested in putting AltruWood’s best beam forward, and, frankly, he likes being on the road.

The Pros and Cons of Wood Burning Stoves
When you imagine a cold winter night spent indoors, you’ll often think of this beacon of warmth: the wood burning stove. While cast iron wood stoves may conjure images of old-fashioned comfort, experts...

3 Ways You Can Use Barn Siding to Spruce up Your Home
Imitation may be the sincerest form of flattery but why imitate when you can be unique? Rather than emulating fashionable farmhouse charm with mass-produced furniture or décor, why not incorporate elements...

Fun St. Patrick’s Day Wood Gifts and Decorations
With Saint Patrick’s Day around the corner, you may be tempted to retrieve that leprechaun T-shirt out of your closet, or get out the corned beef and cabbage recipe. While traditions are fun, we’ve...